A year after our former vice president presented the NDP PEI’s input into the special committee on climate change, we’re revisiting this presentation here.

Thank you for offering Islanders an opportunity for input into this Special Ctte on Climate Change.

The NDP PEI were shocked to learn that 47% of emissions on the Island come from transportation.

This presentation will focus on the need for a free publicly owned & operated transit system across rural PEI.

As democratic socialists, we believe that a major role of Government is to provide services. Free publicly owned and operated transit would be a service that could be used by everyone. Taxes already pay for health care, education and roads.  Why not let taxpayers see the benefits for themselves, in a useful service for all, while also reducing emissions.

Free publicly owned and operated transit would reduce the number of cars on Island roads. Climate change is an emergency issue and free public transport in rural PEI is part of the solution. Some people would simply choose to not own cars. This would save on emissions as well as road maintenance and increase safety.

As well as providing services our government needs to look after the environment and we commend Premier King for highlighting work on Climate Change in his State of the Province address last week. He also mentioned rural transportation and electric buses which we support. These buses don’t need to be the 60 passenger style but rather smaller shuttles until the demand is there for larger buses.

We believe that a free transit system is an essential part of the solution to the combined crises of climate change and inequality on PEI.

Mobility should simply be a right. Free transit would fundamentally transform the Island and the lives of the working class. When everyone has the ability to get to and from work, visit family and friends, go to class or appointments, get groceries, then we create a province where everyone has the chance to thrive.

The Green New Deal promotes expanding public transit as a climate solution. It would make a huge difference on the Island since transportation accounts for almost a half of our emissions. Currently Islanders don’t have the option for sustainable transportation. Improving transit and making it free would quickly change that.  Eventually we could see the complete electrification of all buses which would shrink the largest source of greenhouse gas emissions on PEI.

As of today, rural Islanders are stranded without a private vehicle. By not providing public transportation in rural PEI, the provincial government expects that every household will purchase, own, and maintain at least one vehicle, if not more. This is an unsustainable expectation on the part of government. Islanders are forced to spend large portions of their income on their vehicle’s upkeep and gasoline. Imagine a family of 2 parents with 2 teenagers living outside of O’Leary. Currently the family owns 3 cars. Public transportation isn’t about asking the family to give up all 3 of their vehicles, it’s about getting rid of the 3rd vehicle and learning to live with just 2.

The government cannot preach about making progress on climate change goals, while ignoring the glaring statistic that almost half of the Island’s emissions are coming from transportation, on our tiny, 250km long Island.

Free public transportation will improve people’s lives on PEI. As Islanders age, rural public transportation will give Seniors more independence.  My 80 year old neighbour in Tracadie needs to get her groceries and occasionally attend appointments. She doesn’t like driving and is forever trying to avoid roundabouts. She said she’d love to get a ride to town once a week so she can continue to live in her own home.

A free public transit system does not need to be complicated. This system can be low cost with a low-carbon footprint by using electric shuttles. Federal funding can be sourced to cover some of the start-up cost of these shuttles.

Thank you for giving us the opportunity for input.  It is appropriate that we are meeting in a Fire Hall because our house truly is on fire. 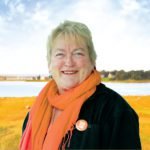